An issue is that of the decision-making capacity of women in their families. It has been noticed that women get little to no say in the making of major familial decisions 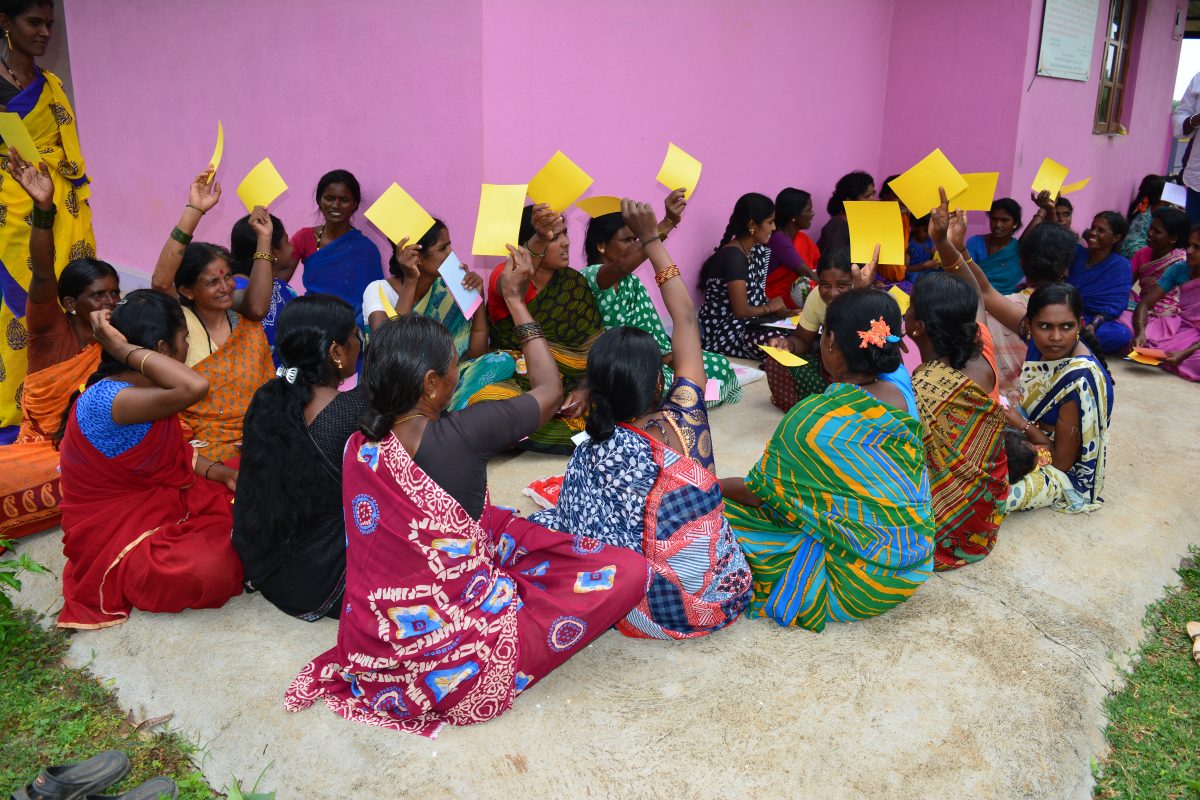 Our interactions with the women at the Namma Maathu forums has helped bring to light a lot of issues faced by women. One such issue is that of the decision-making capacity of women in their families. It has been noticed that women get little to no say in the making of major familial decisions. Women defer from giving concrete responses even if they are directly affected by the decision.

In order to get a better understanding of this problem, we decided to conduct an exercise with 74 women-respondents, all of whom were members of different sanghas from the Kattemanuganahalli village in Naganahalli panchyat located in HD Kote block of Mysuru district. A gender score card will be created based on the results of this exercise. We will then share these results with the women and the panchayat members in order to initiate a discussions on the rights of women to voice their opinions particularly with respect to crucial decisions in the community and their household.

Essentially, the gender score card is a tool used to assess aspects such as gender inequality and the distribution of responsibilities between men and women.

In order to introduce them to the objective of the exercise, we began a discussion on gender roles. We decided to screen a documentary to initiate a conversation about the prevalent gender stereotypes particularly with respect to allocation of responsibilities. They discussed issues such as the household tasks that they were involved in doing all day. They also shared with us the tasks that they disliked, but were forced to do by virtue of being a woman such as washing clothes and collection of firewood.

We then asked to them to sit in a circle and called out 15 statements, one after the other and we asked them to raise their cards depending on their responses. Through this, we wanted to find out which member of the family was responsible for making the decisions on different matters in the family.

Some of the issues that were discussed included:

– Decisions with respect to the family: Who makes the major decisions where the primary stakeholders are the members of the family, education and marriage of the children, procurement of basic amenities for the family, and other valuables. We also asked them who takes the decisions when organising festivities and other events within the household. A question was also posed about who decides for what purpose the loan availed from the sangha should be utilised.

– Decisions with respect to public participation: We wanted to know who, among the husband or wife, participates in the panchayat meetings and the gram sabha level meetings.

– Other decisions such as who is responsible for taking care of the woman when she falls sick and who in the family is given the flexibility of coming home late, and if so, the reason for this flexibility.

Women were allowed to raise multiple cards at a time, and we made a total count of the cards raised for each question. We also requested the women to provide specific details if they raised a blue card to find out which family member they were referring to. We worked to develop a scorecard based on the results of the exercise.

With respect to decisions on agricultural produce – specifically, the crops that have to be grown and the marketing of the produce – majority of the respondents said that it was their husbands or other male members of the family who made the decisions on these matters. (60 and 62 respondents respectively). Husbands once again found themselves in the lead when it came to the participation in the panchayat and gram sabha level meetings. (63 and 60 respondents respectively). According to 60 respondents, the husbands could return to their homes unquestioningly during late hours of the night. Again, 48 yellow cards rose when it came to the question – who takes the major decisions of the family?

Women also do not have access to the market. The results showed that while the woman did the labour of milking the cow, it was the man who went to the market, sold the produce and pocketed the income. “It is usually the case that women immediately put the income earned for the benefit of the family while men spend the income for themselves – on alcohol, gambling,” making it difficult for women to save up.

The responsibilities between men and women are divided unquestioningly – women do the housework and men earn the income by working outside. “We know that our work is largely unpaid labour, but the system has never been questioned.” explained one of the women, when we shared the results with them

The responsibilities between men and women are divided unquestioningly – women do the housework and men earn the income by working outside. “We know that our work is largely unpaid labour, but the system has never been questioned.” explained one of the women, when we shared the results with them.

The respondents saw a majority in their favour (54 respondents) when it came to the decisions with respect to the procurement of the materials required for the daily necessities of the family.

“Husbands are the breadwinners of the family. Even if we work, we still earn lesser than them.” Even when the same work is done? “Yes. Even then.” They further explained that they have grown up in a society where men are perceived to be superior to women, irrespective of the amount of work done by them. “We’re pressured so much to believe this both by the family and society, that it’s impossible to think otherwise.”

Both the husband and the wife (with or without the other male members of the family) together made decisions with respect to matters relating to the education of the children, marriages in the family, procurement of valuables and organising of festivities and events in the family. (42, 34, 33 and 62 respondents, respectively)

On probing a little more, we found out that these other ‘male members of the family’ included relatives like the son of the couple, the father-in-law or the uncles.

“Also, since men have control over the finances in the house, we have to ask them whenever we have to spend money. Justifying our reasons becomes difficult then.” Loans are taken in the name of the women, but it is the husband who decides how the amount has to be utilised. When it comes to repayment, the responsibility takes a U turn, with the women shouldering the burden.

For the three women who said that they could come home late (‘late’ in the rural context referring anytime between 6PM to 7PM) the women explained that they were only allowed to do so because of the type of employment they were involved in. “We work outside of the village, so commuting becomes a problem. We have to call our husbands and inform them beforehand.” Difficulties in getting buses or autos, lack of streetlights and stray dogs on the road are some of the common reasons that delay the women.

What about the single women with no husbands or other male members of the family? “Agreed that they are forced to do most of the work on their own, but just like us, they’re also dependant on men majority of the time.” And why is this the case? “Because women can’t always do the work men can, of course,” shrugged a woman.